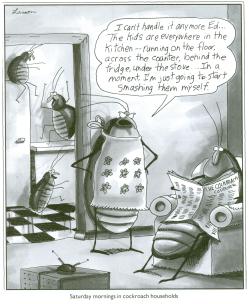 A few weeks ago I wrote an article (here) about Dave Coverly’s comic strip Speed Bump, in which I mentioned another comic strip called The Far Side. While The Far Side is no longer being actively produced by its creator Gary Larson, the strip’s magnificence has been well documented in multiple book collections for those of us (like me) who are too young to have ever read it in the newspapers.

Larson uses role reversals between animals and humans, science, as well as a keen knowledge of the English language to create humorous situations. I have always gotten a kick out of reading the collections of The Far Side comics, and would highly recommend them. You won’t be able to find any of The Far Side comics available on the internet, but check at your local library or buy a volume or two for your own collection.

Note to Parents: The Far Side contains an evolutionary worldview in many of the strips. However, while possibly being a negative, it could also generate good discussions about science. Also, some of the jokes can be crude and are not suitable for younger readers.